Justin Cobb on Business Trends to Look Out For in 2023

As a marketing expert who has helped countless clients reach their financial goals, and beyond, Justin Cobb believes that more people should be aware of just how important the month of January is in their journey toward personal wealth. “This is a month set aside in the financial world in which we seek to understand exactly what the ‘international wealth mentality’ is as expressed around the world. Have we really made progress in improving the division of wealth among the nations or have we remained stagnant over the years?”

Justin looks at this realistically by first stating that nations such as South Africa, Zambia, and Namibia remain the countries with the greatest amount of income inequality. However, as far as the developed ‘wealthy’ nations of the world are concerned, Justin Cobb laments the fact that “The greatest amount of income inequality within the developed world still remains with the United States taking the ‘prize’ if you can call it that.” He looks at the underlying reasons for this such as the political mindset and taxation that account for our lack of progress, along with the fact that less than 40% of our nation’s wealth is held by women.

“Have we really made any progress in closing the gender gap?” he questions. “In the past quarter of a century, since the turning of a new millennium, there has been little improvement in the disparity between the financial independence men have with that held by women. I have a problem with that and feel that it’s time to take responsibility for this ‘travesty of justice,’” as he likes to call it.

“I feel that during this month when we begin setting our goals and resolutions for the coming year, we should do so with the understanding that there are ways we can begin having a healthy wealth mentality.” Justin says that it is important to spend less, save more, and get a stronger focus on setting financial goals for our future such as planning ahead for financial independence at retirement.

Justin Cobb has helped countless companies achieve a more balanced wealth mentality by helping them find ways to begin closing the gender gap within management, finding ways to spend less in order to earn more. “A healthy wealth mentality always strives toward a future goal by re-envisioning what it takes to get there. Our policies cannot run parallel to the nation’s policies because we see where that has gotten us, or not as the case may be.” Justin urges us to take this month to plan ahead by setting goals and steps along the way. In his words, “It’s the perfect month to do just that.” 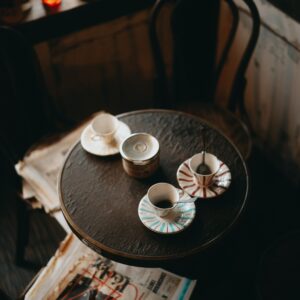 As a successful entrepreneur in the field of marketing, Justin Cobb knows full well just how important setting annual goals...