How to Replace Yourself

The Difference Between a Leader and a Manager

Keep Your People in Tough Times

How to Develop Great Leaders

The Habits of Effective Entrepreneurs

Introverts vs Extroverts in Business

Managing Your Own Business PR

The Difference Between Empathy and Sympathy in Business

The Bad Habits That Will Stop You Being Successful

Using the Agile Mindset to Grow Your Business

How to Earn Respect as a Leader

4 Things That Will Stop People Investing in Your Business

Businesses Thriving in the Pandemic

How to Earn Respect as a Leader

Hiring the perfect employee is one part of a successful business. Keeping them around is another. You may think that just incentivising them with good pay and benefits is enough. But increasing amount of evidence supports the fact that people want to work for someone they respect. Employees will often leave a position for a lesser-paying one just because of issues with leadership. So what actions can you take as a leader to make sure you are earning the respect of your team?

Give Respect to Get It

The most respected leaders know that respect is a two-way street. They treat everyone compassionately and with consideration. Even when they have to give criticism or negative feedback. This is always done in a respectful way.

People who are always rushing to speak first often come across as insecure and rash. Those who take the time to listen and gather all the facts before speaking seem like they really see the bigger picture. A true leader knows the value of listening, and how it grows their respect immensely.

It’s no good chastising your employees for being on time if you’re always wandering in and out of the office whenever you feel like it. You’ll come across like a hypocrite, and lose respect. Set an example by being the first in the office and the last to leave.

Being honest and straightforward will earn you more respect than putting on a facade of perfection. It’s alright to say that you made a mistake or that you were wrong. People don’t lose respect for being wrong. They lose it for being wrong and being too proud to admit it.

Respect is hard to win and easy to lose. Take the time to make sure you’re putting in a little work every day to win more of it.

Using the Agile Mindset to Grow Your Business 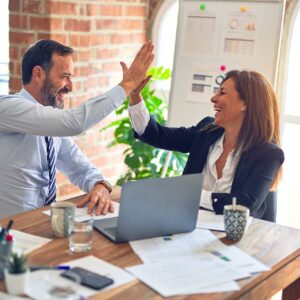 Making money is the main goal of most businesses. Sure, there are other goals. Many entrepreneurs want to change the world,...