What would you give to be mentored by some of the most successful entrepreneurs of our day? While being mentored by the cofounders of PayPal or Nike might be one of your wildest dreams, it’s probably not something you could expect in this lifetime. Or is it? According to Justin Cobb, the next best alternative is to find a comfortable spot and sit down to read books authored by some of today’s most successful entrepreneurs. They gladly tell the story of their journey from obscurity to global fame as founding fathers of some of the world’s most successful brands.

“As a marketing professional,” Justin says, “I learned early on that communication is one of the key factors of success. Not only in marketing, but in any business, it is vitally important to build a connection with anyone you are trying to win over to your way of thinking. One of my earliest mentors suggested I read How to Win Friends and Influence People written by Dale Carnegie way back in 1936. I credit this one book as teaching me the importance of communication as the foundation of marketing.”

Justin says that no matter how little time you have to spare, you should reserve a set time each day to pick up a book written by some of today’s greatest entrepreneurs. He has personally read the memoir of Phil Knight, one of the cofounders of the immensely successful Nike brand and also the insights of Peter Thiel, cofounder of PayPal. These men started at the ground with just a few dollars in their pockets and are now two of the most noteworthy entrepreneurs of modern times.

“If I could recommend just one thing to help budding entrepreneurs reach their goals it would be to take the time to read the success stories of those who made it to the very top of their respective industries. Each has a story to tell and not all their methods were the same, but there are lessons to be learned from each and every one.” He goes on to say that if there is a particular brand or company that inspires you, take the time to learn all that you can about how they achieved success, overcoming obstacles along the way.

Reading seems to be something we’ve left by the wayside but as Justin clearly says, there is something to be learned by reading the words of those who rose to the very top. In his eyes, it’s the next best thing to being mentored by men like Warren Buffet or Bill Gates who share their personal stories for the edification of anyone who cares to listen. 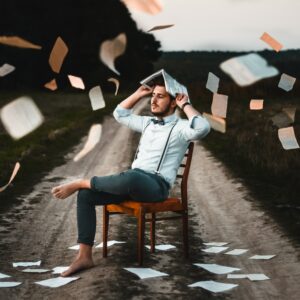 As a successful entrepreneur in his own right, Justin Cobb, explores the one commonality among all successful people. He has found...